FOOD AND DRINK IN RUSSIA

Date of publication: 2017-10-18 11:22:52
Дата модификации: 2017-10-18 12:05:28
Views: 1219
Author: admin
FOOD IN RUSSIA has a bad reputation. This is because for years there was none, unless you count the mealy bits of vegetable matter at the other end of lines the size of the Panama Canal. As communism was collapsing in 1990 and 1991, more and more basic staples were replaced with ration coupons, and no amount of ketchup would make these palatable no matter how hungry you were. One of the odd contradictions of these bygone days were the sumptious meals prepared by resourceful Russian matrons any time a guest wandered into their home.
In all seriousness, Russian food does not deserve such a bad rap. True, it is a little light in terms of variety and disappointingly bland for people who like spices other than salt, but it makes up for this by being served in herculean quantities which will keep you warm for these ten-month winters. Home cooked Russian meals are wholesome and delicious, and it only takes a few of them before you'll start looking like a matryoshka doll.
St. Petersburg does suffer from an underdeveloped restaurant and cafe scene, though more and more places are opening with various cuisines and atmospheres. Visitors can rest assured that they will not go hungry; the challenge is to try and make the most out of meals so that they are something to be enjoyed rather than a nasty way to avoid starvation.
Note that Russians drink tea as though there won't be any available tomorrow, which for years was not too far from the truth. In Russia tea is tea - they rarely fool around with this Earl Grey or Lapsang Souchong nonsense. Some people collect and dry various herbs during the summertime to brew into their tea, with mint (myata) being the most common. Tea is almost never served alone but with some kind of munchies, from little sandwiches to small dishes of home-made jam. Coffee is not quite as prevalent, for which we should all be thankful as it's usually pitifully weak and tastes like it was brewed from fertilizer.
Breakfast
(Zavtrak | ) can be a beautiful Continental affair with bread, butter, jam, cheeses, sausage, eggs, porridge (kasha), and pancakes (bliny); it can also be a disappointing way to start the day with a lump of greasy porridge, stale bread, and weak over-sweetened tea. It all depends on where you wake up.
Lunch
(Obyed | )* used to be the main meal of the day in Russia, but since the fall of communism people no longer have the five or so hours of free time in the middle of the day that they used to and so it has become less important than dinner. Lunch begins with a simple appetizer (usually soup and/or salad), followed by a meat or fish dish. To finish, tea or coffee is traditionally served, sometimes with ice cream or pastries.
Dinner
(Uzhin | )*, a serious ordeal, begins with appetizers (zakuski) which can include smoked fish, cold cuts, caviar, sandwiches, and various salads. Next comes the main course, followed by tea or coffee and dessert. Formal dinners at many restaurants or at people's homes are events in themselves, with plenty of time in between courses for conversation, drinking, singing, and dancing. 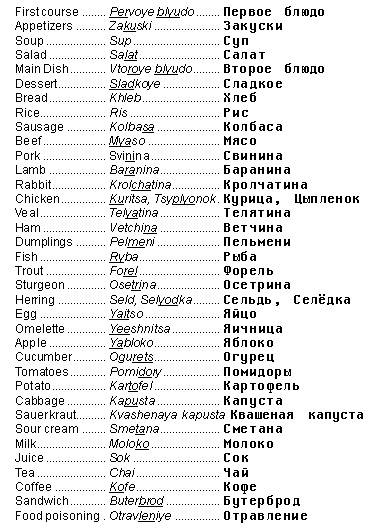 Article description: FOOD IN RUSSIA has a bad reputation.

https://wfi.lomasm.ru/english.union_maniac/food_and_drink_in_russia
Development page is completed by 0%